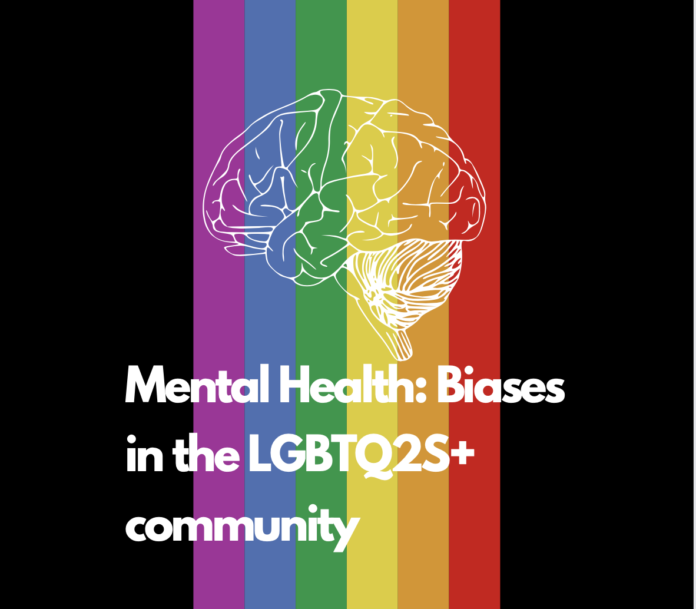 “When I was diagnosed, I didn’t want to reach out for help. The blatant disrespect I got from my peers made me feel like that’s how everyone thought of me.”

The community continues to face challenges with their mental health and experience more hurdles because of prejudices that still exist today.

A study conducted by Statistics Canada found that poor mental health outcomes were reoccurring within individuals who identify as members of the LGBTQS2+ community, and found that sexual minority groups were more likely to experience anxiety, mood disorders, and have suicidal tendencies. They were also less likely to be flourishing or have positive mental health.

Heterosexism is the discrimination and prejudice towards LGBTQS2+ people in favour of heterosexual relationships.

How is LGBTQS2+ Mental Health different compared to Heterosexual Health?

Tin Vo, professor at Wilfried Laurier University says the mental health of LGBTQS2+ people is not the same as heterosexual mental health, as they risk more challenges within their everyday lives.

“We experience heterosexism and cisgenderism in mainstream society. LGBTQS2+ people tend to have poorer mental health outcomes than their straight counterparts,” Vo said.

Vo says that this was due to the overwhelming heterosexism in today’s society.

“It even happens within their own families, families with more conservative attitudes can even lead to increased risks of other issues like homelessness, or even substance use,” he said.

Todd Coleman, professor at Wilfried Laurier University said that the biggest determining factors for these differences could be overt levels of discrimination.

“Things like violence and overt name-calling are still present, even though they might not be as much as they were in the past,” Coleman said.

What are the consequences?

Coleman believes that heterosexism has a large impact on health, and healthcare delivery within the LGBTQS2+ community. This can be through lack of acknowledgement towards sexual orientation and gender identity.

Coleman says that heterosexism, and not acknowledging someone’s identity, can have direct effects on minorities. “They’re the concept of minority stress, suggesting that minority groups are disproportionately higher, and more affected by these forms of discrimination and those manifest themselves in individual stressors,” he said.

“Things like depression, anxiety, suicidal ideation, and attempts tend to be higher among sexual orientation and gender identity,” Coleman said. A large portion of this is due to heterosexism.

Vo, who studies heterosexism and heteronormativity, explained that people within the LGBTQS2+ community who are impacted by heterosexism, may not feel comfortable in certain spaces.

“They might not feel comfortable coming out in the workplace or being themselves or at schools, and this leads to increased levels of depression or suicidal ideation and increased anxiety, because they expect this discrimination to occur in various settings,” Vo said.

The Health Impacts on the Community

The effects of heterosexism have largely contributed towards mental health issues amongst the LGBTQS2+ community.

Erica Spears is one of those affected.

Spears, who currently studies at York University, had a lot of conflict with her sexual identity in her youth and felt lost.

“When I was younger, being called slurs not only affected the way I thought, but the way I presented myself as well.” “The way I was treated in my youth put me in a dark place, I almost thought I wasn’t able to get out of,” she said.

“I have suffered from depression and anxiety since my youth, but I feel very welcome in the LGBTQS2+ community, so I don’t feel anxious around others who are also in the community.” “It wasn’t people in the community who had an issue with me though, it was the people who thought I was capable of change, that I was doing this for attention,” Spears said.

LGBTQS2+ individuals tend to avoid seeking help in terms of their mental state.

Spears felt fear towards seeking out help, fearing being judged for her differences.

“When I was diagnosed, I didn’t want to reach out for help. The blatant disrespect I got from my peers made me feel like that’s how everyone thought of me,” Spears said.

The facts behind LGBTQ Mental Health

A study conducted by Rainbow Health Ontario reveals that LGBTQS2+ youth have a 14 times higher estimated risk of suicide or substance abuse than their heterosexual counterparts.LGBTQS2+ people experience many stereotypes, prejudice, and discrimination. The stigma can have a large variety of negative consequences throughout the person’s life span.

If people within the LGBTQS2+ community are not seeking help for their mental health, this number can climb.

Rainbow Health Ontario is a provincial organization that seeks to promote health and family acceptance of LGBTQS2+ individuals, and further encourages them to connect with LGBTQS2+ communities.

They also work to provide appropriate equity training, ensuring that suicide and crisis intervention staff approach LGBTQS2+ clients appropriately. The organization does this by removing stereotypes and discrimination, as well as the gender of trans clients so they are not misidentified.

Although we are on the right track of reducing heterosexism within the LGBTQS2+ community, more can be done around the issue.

Vo expressed that clear policies and procedures around anti-discrimination should be enforced.

“Having clear policies around anti-discrimination and procedures, and enforcing those policies, as well as making sure that people are trained to respond in an appropriate way when they do observe heterosexism from occurring so they can feel comfortable responding and speaking up and speaking out,” Vo said.

Vo also says that we need to make sure there is support at a higher level for them to speak up about heterosexism that is occurring, as we continue to inform people around inclusion and diversity and appropriate ways of interacting with LGBTQS2+ people.

Coleman says there needs to be simply more recognition of the community’s suffering.

“More visibility, more recognition, more research on the issues and ways of mitigating it at community levels like direct committee and individual levels, instead of relying on these larger policies to protect us, is something that could be done in the future,” Coleman said.

The Canadian Mental Health Association  has a large list available on ways to prevent heterosexism. By becoming familiar with how internalized discrimination can impact health of an individual, developing an understanding of what heterosexism is, promoting acceptance towards LGBTQS2+ people, and improving recognition towards marginalized communities and individuals.

For Better or For Worse: the debate around virtual learning

The squared circle of dreams