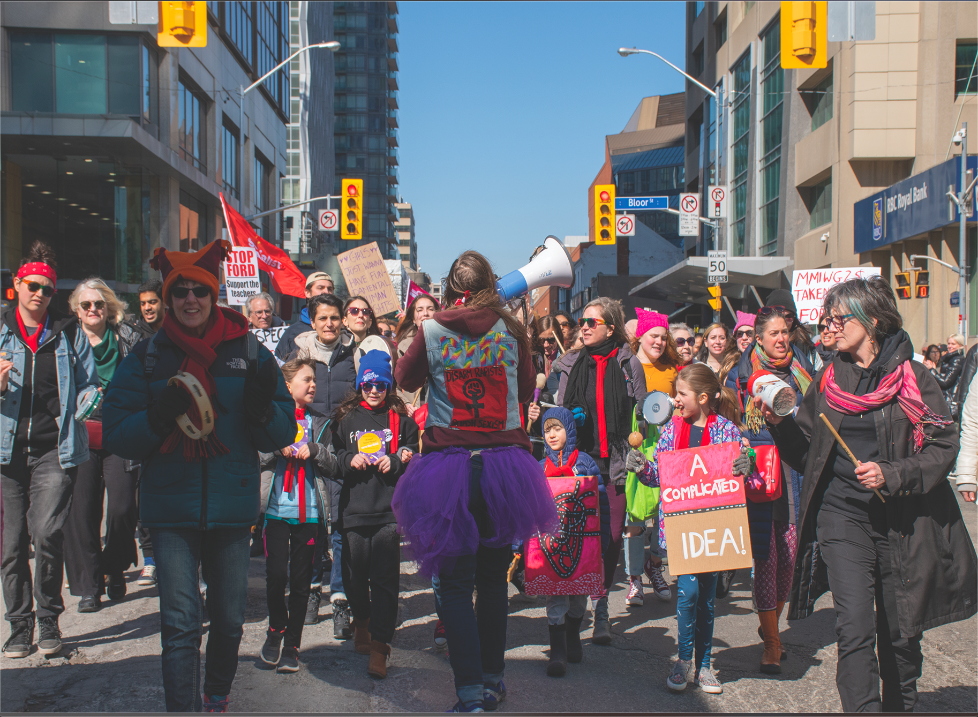 Recently, feminism has become tainted by the stereotypical image of a needlessly raging woman. She holds a sign that says “the future is female” in one hand and a megaphone in the other.

From her mouth, she spews venom at any man who dares cross her path and roams the internet in search of a good old heated argument full of memes and witty shut downs.

In classrooms, the timeline of feminism is patchy. It began 100 years ago when women won the right to vote and jumps to the present day where men and women are considered equal- on technical terms.

We can wear jeans, get an education and work, so what is there to complain about, right?

There are still gaps that fail women systemically when we only view feminism through a historical lens.

Current stigma connects to social media where the words feminist, SJW, triggered and woke blend together to form an easily dismissed version of feminism.

The phrase, “strong independent woman,” is hardly said without the accompaniment of sarcasm or a lengthy eye-roll.

“There’s a lot of stigma around labelling yourself as a feminist. People don’t want to identify with it because they don’t understand what it’s really about,” says Diviya Leonard, a 17-year-old public speaker, activist and blogger.

Leonard wrote a winning speech on girls’ rights in Grade 6 and has been dedicated to the movement ever since.

Through her blog, Diviyaliveshere.com, she shares her activism and ideas online.

“I started a social justice blog when I was 12. I’ve used that ever since as an outlet to express myself and if there’s ever a topic that comes up I’m really passionate about,” Leonard says.

Leonard can’t imagine what her advocacy would look like without social media.

“I’ve connected a lot with like-minded people, and really learned from others by reading their stuff and reading other people’s blogs,” she says.

With advances in technology, people like Leonard are turning to the internet to reform feminism in 2020.

Social media is a powerful tool for spreading awareness and increasing engagement.

Hashtags like #MeToo, #MMIW, #BelieveWomen and #BodyPositive took Twitter by storm and welcomed a range of perspectives to the conversation.

Trish Woods, the Investigative journalist, producer and director of the recent Amazon docuseries, Ted Bundy: Falling for a Killer, has other concerns about social media. “I think it turns young women into anxiety-ridden creatures,” says Woods.

New algorithms quickly turn news feeds into self-prescribed echo chambers. Our own perceptions are regurgitated back at us and scrolling outside of our own interests and agendas takes more effort.

Woods struggles to find the positive side of social media. For Woods, whose series gave voice to female victims of the infamous serial killer, activism doesn’t require an online presence.

When marches and hashtags turn into photo-ops, “there’s a danger of it just becoming a bumper sticker,” says Woods.

The #BodyPositive movement, which started in good faith, evidently became an excuse to bare it all online because posting a revealing photo is somehow the only way to prove  self-worth.

Even the #MeToo movement, founded by Tarana Burke began as a grassroots organization primarily helping black survivors of sexual assault.

Years later, a flood of tweets from high-profile celebrities in Hollywood steered the phrase “me too” in a new direction.

Leonard says she’s become accustomed to an overused portrayal of the “typical white privileged woman living in Hollywood,” when she thinks of the Me Too movement.

Marginalized voices are easily drowned out by celebrities who unintentionally dilute the movement.

“It’s really important to recognize how many different stories there are and those voices are what we need to hear,” says Leonard.

Andrea Gunraj, Vice President of Public Engagement at the Canadian Women’s Foundation, cautions that social media can be a double-edged sword.

Even with social movement hashtags, it can be difficult to create useful conversation.

The broadness of feminism can’t be compressed into a 280 character tweet.

As a result, tweets are reduced to clever and catchy clapbacks in the hope of going viral.

This can be especially dangerous as “if we see things as just a trend and don’t see the people behind it,” Gunraj says.

For girls especially, self esteem is easily damaged online.

“There are too many competing things that they have to be and it’s just really, really confusing,” Gunraj says.

Girls are expected to be smart and sexy yet cool and reserved.

It becomes hard to navigate while still exploring your identity. Throw in activism, and it becomes even more complicated.

For these reasons, Gunraj says media literacy is crucial.

“It’s a digital world that we’re living in and there are lots of benefits to social media, so not saying don’t use Instagram, but giving them the tools to not always look at it, because it’s the worst for mental health.”

Social media has given a global perspective to gender equality for activists like Leonard.

As important as it is to think about issues locally, “you need to think about it outside of Canada, like what’s happening around the world and how privileged a lot of people are in Canada,” Leonard says.

Involved with campaigns like Change The Birth Story and Because I Am A Girl, Leonard has travelled all the way to Ghana to meet some of the people she advocates for.

“It was really incredible to be in these communities and meet people that have been impacted the most,” she says.

The Women’s March in Toronto is another place for women carrying different experiences and connections outside of Canada to band together.

With power in numbers, finding commonality with people who have different experiences makes the feminism movement just that much stronger.

Urbanization in the late nineteenth century brought many women closer together literally and figuratively.

As Toronto expanded, women from earlier waves of feminism were able to congregate and push for change. Technology has expanded boundaries once again and women across the globe are supporting each other.

As academia becomes more critical of past waves, intersectionality has become an important piece of the gender equality puzzle and what once seemed to be an exclusive movement now encompasses a wide range of identities.

“People are recognizing that one perspective is not the only way of looking at things,” Gunraj says.

In 2020, Leonard says, “It’s really about equality between men and women and everyone in between. It’s as simple as that. It’s not anti-men and for women, it’s about equality for all.”

In recent years, feminists from the ‘70s have taken a lot of  flack for excluding diverse women from the movement.

“They were just beginning to deal with male violence. So, yes, it’s bad that it wasn’t more inclusive, but they were focusing on really important things and we can’t say they weren’t brave,” says Woods.

“I’m a person who thinks both things can be true.”

With so many changes over the years, it’s easy to look at an older wave with a new wave perspective and forget to acknowledge the sacrifices made at the time.

Without the progress made by earlier generations, we wouldn’t be able to move onto our next set of challenges.

Today, abortion, birth control and rape crisis shelters are available for women, but this wasn’t the case in the ‘70s.

In 2020, we’re looking forward to the root causes of sexism and combating them earlier.

Identity, breaking down binaries and ending the stigma surrounding STEM (Science, Technology, Engineering and Math) programs are all geared towards younger generations.

As a result, the Women’s March has seen a noticeable increase in youth attendance.

When activists like Leonard raise their voice, people begin to notice that ending gender inequality is more than just a few policy changes, it’s a cultural change.

“It’s really important to give young people opportunities because they have a lot more toshare than what a lot of people are giving credit for,” Leonard says.

A Statistics Canada study (2016), highlighted on CanadianWomen.org, shows that boys and girls have the same average scores in science at 15. Still, STEM programs and fields are crowded by men.

“With STEM, in particular, I’ve seen research that showed when girls are younger, they have a lot of different ideas of what they want to do and that tends to narrow in as they get older,” Gunraj says.

Society is beginning to focus a lot on programs that involve girls in STEM, but Gunraj notes that it’s important to acknowledge the reasons girls are discouraged from exploring STEM and other ‘non-traditional’ things in the first place.

“Girls feel they have to be all these things and I think they tend to clam up and that leads to mental health issues,” she says.

This is where negative connotations put pressure on girls to choose certain paths and disregard all possibilities of an alternative.

When we view STEM as ‘non-traditional’ for girls, we suggest that they don’t belong in STEM. Often, you’ll hear the phrase, “I want a traditional woman” as opposed to a modern woman.

But what does that actually mean?

‘Traditional women’ follow a role depicted as the ‘perfect housewife’ and view their male counterpart as the ‘alpha’.

“The baggage that we carry, about what it means to be a real woman and a real man, is really worth unpacking,”Gunraj says.

“You really see how that can lead to things like gender-based violence, control, manipulation and all the things that people talk about in terms of relationship violence,” she says.

Gender expectations are most influential in our home life, but they also happen culturally on a larger scale.

“It’s important for family, friends, adults, to really help stop these battling conceptions and this battling idea of what it means to be a girl and just let girls decide who they want to be,” Gunraj says.

Around 100 years ago, women fought to simply be considered as a person.

As we near the one century mark, women continue to break the suffocating mold of femininity.

It’s not about redefining what it means to be a female, but abandoning definitions and ‘inherent’ characteristics altogether – for all genders.

At this point, actions speak louder than labels.

“A lot of people, for instance, in my community don’t use the term feminist, but I believe that they do many feminist things,” Gunraj says.

You don’t necessarily need to brand yourself or form your entire identity around a single label.

In the digital age, supporting gender equality boils down to knowing when to take the mic and when to pass it on. Or when to tweet and when to retweet.

Everyone Has a Podcast But You

The Challenges of COVID-19 for Canadians with Underlying Health Conditions

All About The Academics: the finer points of applying for Post-Secondary in Ontario

Protecting the Planet from Plastic Pollution