What’s the secret behind the immersive galleries’ mounting popularity?

Every footstep taken, dims the yellow-vintage light from the ticket office into darkness. Only the TV screens scrolling the pre-modernist painter’s biography light up the black tunnel that precedes 19th century France, made from brushstrokes and Edith Piaf – a popular French singer. The queue ahead shrinks, with more and more attendees crossing the curtain that shields fantasy from Toronto’s harbour front leisurely streets. Finally, ten minutes in with the tickets scanned, and the COVID-19 protocols explained, the black cloth rolls, welcoming all those who paid at least $49 inside the “Immersive Van Gogh” exhibition.

The space, the size of eight olympic-size swimming pools, of glossy-concrete floor and white drywall, showcases the Dutch artist’s work without ever letting the public see the paintings. Instead, renowned pieces such as “The Potato Eaters” and “Sunflowers” were built from the details in a non-stop projected production. Set in a canvas that fills the room, water paint strokes pose beyond the glimpse of the eye, moving in front, beside and behind the spectators. Background music joins the display, pitching, slowing, ramping and silencing in symphony with the shapes that grow, swing and finally disappear.

The Museum Management and Curatorship journal, research and commentary publication on gallery and art collection management, sorted Vincent Van Gogh’s exhibition into a “multisensory experience.” This “distorts the feeling of time and place,” while submerging visitors in “a completely different reality.” Yet the display hasn’t been the only one of its kind. Instead, it follows a common trend among Toronto’s galleries – immersionism.

Since they premiered during the awkwardness of Canada’s first COVID-19 summer in 2020, immersive art exhibitions have sparked a sensation. It all started with the Dutch painter’s multisensory gallery, which then accompanied Beyond Monet, Immersive Klimt Revolution, and before long Frida: Immersive Dream. The exhibits came to visit and stayed past the time they were initially expecting, while fully booking most of their functions, sometimes even months before their launch.

But what weighs on their ramping popularity among Torontonians that makes up for such success?

The answer is as open as the interpretation one can draw from a painting — limitless. 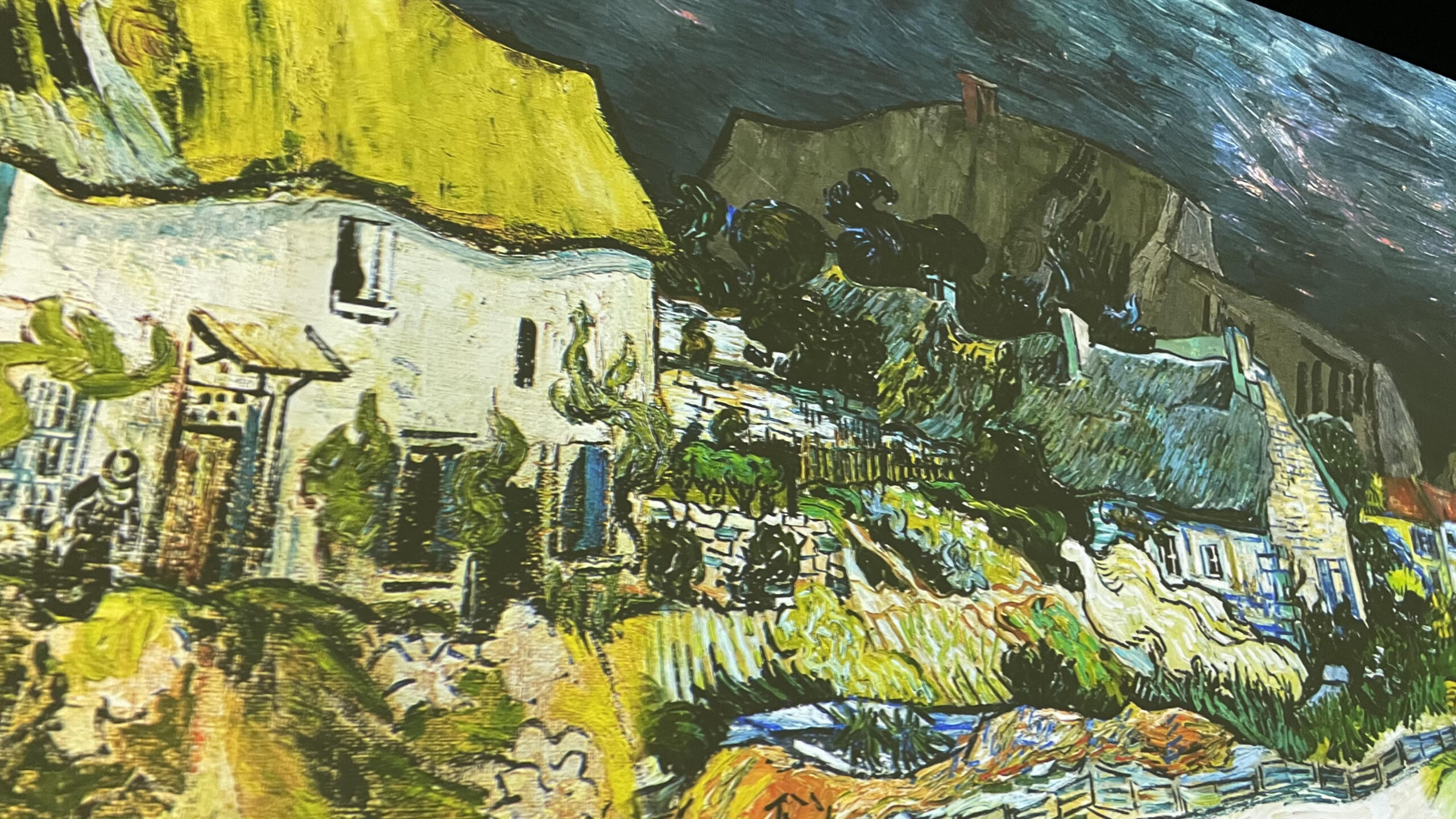 “A new way of encountering art”

As senses get loosened, engaged all together in deciphering the meaning behind the digitalized strokes, OCAD Professor Haru Ji, a media artist expert in interactive installations and virtual reality, says immersive displays transform the relationship between the spectator and the painting from “appreciation to experience.” Such change of pace has been broadly received by Torontonians, who haven’t seen anything like this before.

Immersive art exhibitions had a delayed landing in North America, as Haru says, the idea of splashing art projections into empty walls and coupling along with background music sets back to the 1960s. However, in Canada, they can be traced to late 2019 with the Van Gogh exhibition in Montreal and then to Toronto a couple of months after. They haven’t lasted enough to stop being novel, a key characteristic any art exhibition can pride itself to have in a city “thirsty for new experiences,” Haru says. 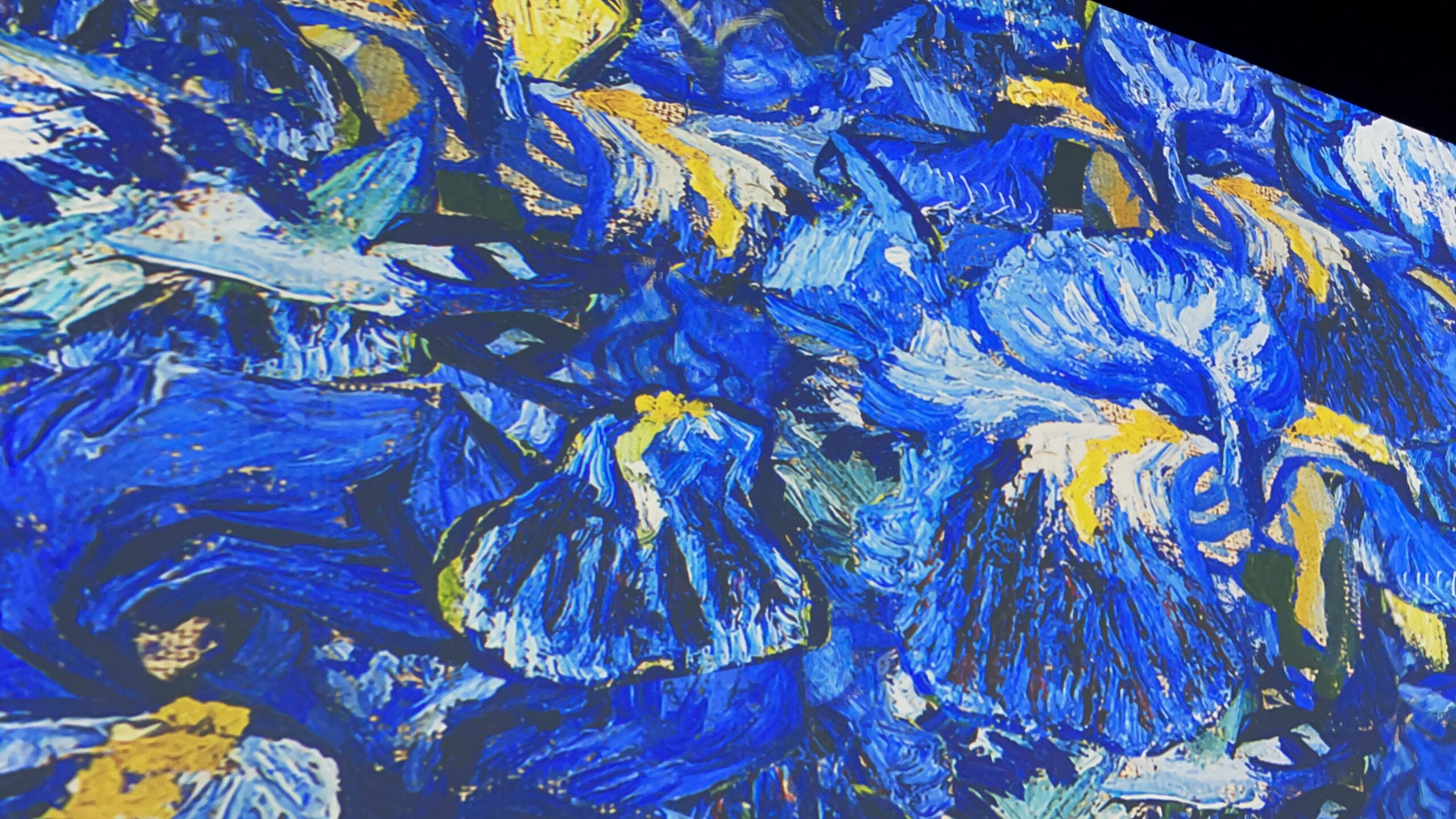 From the blue irises to the yellow-wooden bed and the potato eaters’ faces, Van Gogh’s original canvases resemble the projections at 1 Yonge St. However, clear-cut differences still separate from immersive artwork enough to be unknown and unexpected for the public, says Joy Bernus, Immersive Klimt and Van Gogh exhibition’s supervisor. “They see the word immersive and they wonder what does that mean?” Bernus says. And to please such doubt, there’s only one solution, immersing inside the paintings.

Summer 2020, gloomed away the sunny weather as a worldwide biological threat wiped the pre-pandemic normality. Yet as capacity limits indoor spread, leisure and entertainment mostly shut down, and human interactions were dismissed by face layering. Immersive galleries settled as one of Toronto’s COVID-19 relief.

Holding doors open along the peaks, says Van Gogh exhibit attendee Katherine Rhy. Immersive exhibitions were an escape for many to “take back the beauty” lost in-between positive case counts and deaths while enjoying “stepping out and being safe.” Exhibition supervisor Bernus says that it attracts Torontonians with the promise of a “whole new area to play with,” aiming for the days and weeks that are drowned in monotony.

Premiering functions during unprecedented times made a difference. However, their success in a non-pandemic era might have been possible. The versatility of these exhibitions allows for attendees from all ages, cultural and ethnic backgrounds to enjoy the display. No language barrier, no content trigger warning, or prior art knowledge interferes between the spectators and the crafting of this “memorable experience,”  Haru says. Immersive art galleries provide the chance to bring couples and  families; seniors and single people inside foreign artwork, without leaving the city. 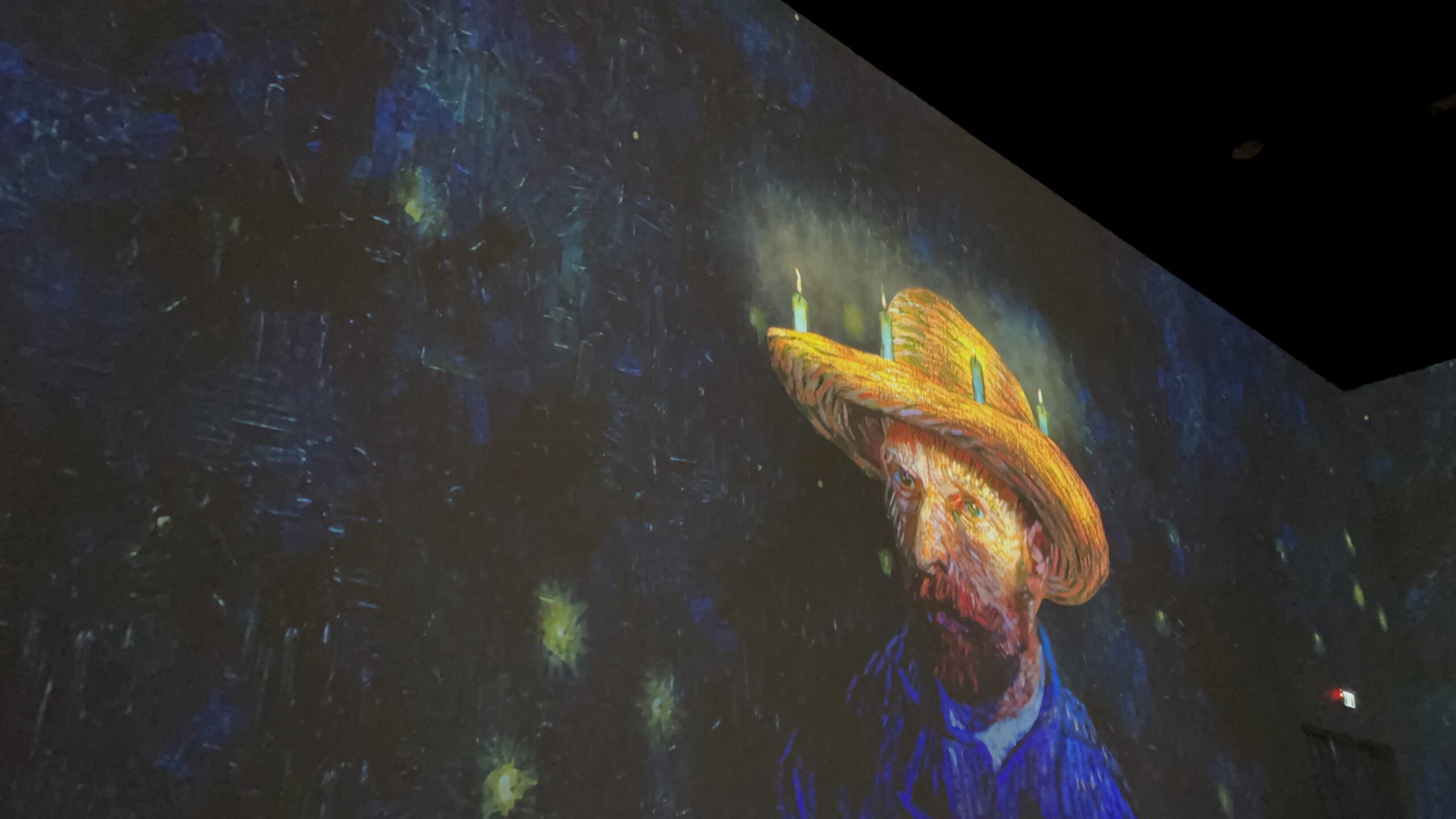 “The masterminds behind the strokes“

What does a surrealist Mexican self-portrait painter share with the founder of French impressionism?

Besides the canvas, are the worldwide renowned creations they brought to life on the white surface. The techniques, tonalities and shapes of Frida Kahlo and Claude Monet have trespassed the art shifts through decades, without letting it be iconic. Nowadays, says Ryerson University gallery researcher Gaëlle Morel, “they’re part of [our] visual culture,” stretching from movies and books to calendars, towels and “why not immersive shows?”

In or outside the artistic dome, insignias such as Picasso, Kahlo, Monet resonate within people’s minds. Likewise, paintings such as The Starry Night or The Kiss have a sense of familiarity. Most of us don’t need to know the traumatic life behind the inspiring paintings of Van Gogh’s artistic hands employed through painting the reflection on the water. This draws a widely distinguished artwork in our mind, once we stumble upon anything that relates to the artist.

Names with a loaded historical relevance are thus by rule of thumb, says Haru, “steady sellers,” for any artistic or non-artistic venue, and Toronto’s immersive galleries haven’t been the exception. “Klimt Revolution,”and “Beyond Monet,” ramping popularity, lays in the artist displayed, but most importantly on the extent of their already existing fame.

Moreover, the idea of exploring and discovering a new side out of an artist that has been scrutinized through an immersive approach, piques enough interest from art connoisseurs to pop culture fanatics. For Haru, this is the path to settle down with an immersive art exhibition as a venue format, which can later run with equal profitability with a lesser-known artist. From the other side of the coin, Gaëlle says it crafts a strategy of a repetitive formula that eventually pushes public demand “to step home,” as the list of “big names” shrinks—ticking down the remaining time for Toronto’s immersive galleries in the near future.

For now, immersive galleries are plunged into a different experience. The emotional trigger given by the changing proportion of the pieces, dancing in symphony along with the background music, sows the idea of going back again into this surrealist environment. Dragged in next time, by a different “big name.”

One of Van Gogh’s most iconic paintings wrapped the spectacle, dropping golden starry circles that spread through the walls. The echoing music of nostalgic piano notes filled the room uninterrupted, synchronizing with stars from the black and dark blue sky. The golden dots alerted your attention from the changing background, now filled with a calmly swinging river that mirrors the yellow and orange stars. The painting is finally clearly visible; everyone fixes their heads while moving their eyes, hoping to soak up as much of the experience as possible.

All spectators are swallowed inside a different world that grows from floor to ceiling, through the walls. We are inside Van Gogh’s paintings as they come to life and move around us, setting us all out of the starry night over the Rhône river. It’s all in one, the novel experience, the mastermind behind and the moment in time that draws you to visit, stay, and go back.